Triathlon has a soul, and it’s a beautiful soul. I’m thankful for my new (and future) triathlon friends.

With all the changes in my life over the last few years, I’ve discovered that a lot of my existing friendships no longer fit. In some cases, the disconnect stems from me; as I learn to respect myself more, I find that some people who I thought were friends didn’t treat me that well and weren’t as close to me as I thought. In other cases, my habit changes simply took me away from activities that I shared with friends, leaving us still friends, but at a distance. We just don’t see each other often. “Some old friends can handle the change — the ones that are and always will be your friends,” I wrote in a personal blog entry a few months back. “But many can’t; they depend too much on the social glue of food, drink, etc.”

Today I find myself thinking back on how many good acquaintances — and a few people I suspect will become very, very good friends — that I’ve met through triathlon. Even though I’ve been training for and participating in events for less than a year, I already recognize people at local races, many who come up and say hello, ask how I performed that day, where I’m racing next, and how Audra and I are doing in general. It’s gratifying.

I know that the relative ease with which we’re meeting friends in the sport is partly due to the camaraderie common among participants in all type of events. But there’s something special about triathlon beyond simple shared experience. For one, there’s less hate. Where runners don’t necessarily think much of cyclists, and cyclists may not care for swimmers, triathletes share experiences with all three. (Admittedly, we also get some in-group reinforcement from the fact that all three groups read “multisport athlete” as “mediocre at all sports.”) Seriously, though, there’s something to the spirit of triathlon. 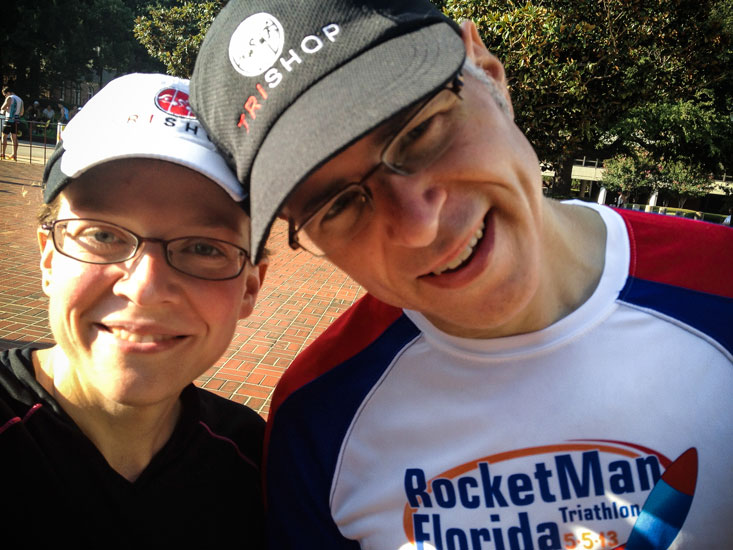 I don’t always post them, but Audra and I snap these shots at almost every event — because we’re happy.

Consider Chris McCormack’s recent column in Triathlon Magazine, entitled “The Soul of the Sport” in which the Ironman world champion (with hundreds of wins at shorter distances as well) wrote about two “local” tris in which he competed this April. He writes: “I found two races in California that I could enter, and I slipped onto the website and paid for my entry. I wanted no fanfare or special treatment; I was simply going to go and have fun… Swim, bike, and run as hard as I could early on a weekend morning and enjoy everything that is triathlon.”

Curious, I looked up his results. In his second race of the weekend (he signed up for the the Huntington Beach Tri on Saturday and the first race in the L.A. Triathlon Series on Sunday), he, unsurprisingly, won:

But what’s really telling about the “soul of the sport” is that Ted Yang, a 43-year-old from Torrance, California, ran that same course literally twice as slow as McCormack, finishing 335th overall. Charles Chaney, a 40-year-old from Monrovia, CA, ran the event as well, finishing just a few minutes behind McCormack. Yang, likely a first-timer hoping to finish the events; Chaney, likely a relatively accomplished age-grouper; and McCormack, a world champion, shared this course on this day. That’s part of the magic. Everyone who competes shares the experience — the same experience, though from a very personal perspective. As a competitor in my first triathlon ever said to me while we waited for the swim start, “Triathlon is all about competing with yourself — with a couple hundred of your friends there to share the experience.” Certainly with his career on the line at Kona, McCormack likely has a focus beyond just bettering his past exploits. But even he recognizes this connection shared by the local triathlete crowd:

I spent my time after the race hanging out with many of the first-timers who raced and I listened to their stories. There was no talk of drafting calls or aero helmets, no mention of power numbers or compression garments. It was the old, simple stuff of how tough the run was and how great the course was in their local town. It was unbelievably refreshing.

Another benefit Audra and I have found in the triathlete community is its acceptance of a serious focus on nutrition and training. For years, I learned to avoid outings with friends involving food, because inevitably I’d run into a “don’t make waves” attitude. “Just eat it,” was the pressure. “Do what everyone else does.” Not so with triathletes. While our specific food and training decisions may differ, we share an understanding of the importance of using these lifestyle variables to one’s advantage, whether the goal is to go faster or simply live longer (or better). So among triathletes, I don’t have to hide the fact that I’m a vegetarian and don’t drink. For the most part, they don’t judge, and I certainly don’t judge them. Bonus: among the triathlon crowd, obsession is the norm, not an oddity.

So to shorten and already-too-long ramble to the point: we’re loving the interactions we’ve had in the local tri community, and look forward to more over the coming years. It’s been a great adventure for us, which I’d highly recommend to anyone. In fact, along those same lines I’ve taken to spending a few minutes each day seeking out folks tweeting about wanting to try their first triathlon and responding via the ThresholdPace account with encouragement. It’s not as exciting as having Macca show up at your first sprint, but hey, we all give with what we have.