Audra and I just barely make the start of a 5k with a beautiful course, good company, and pancakes.

About a week after we signed up for the Cooper Sprint, Dallas Athletes announced a sprint triathlon at TWU — an event much closer to us, put on by a group with which we’re much more familiar, and scheduled for a week after Cooper. Dallas Athletes events are almost always a good time, too; they (accurately) describe their events as “an event followed by a party, though not necessarily in that order.” So we were bummed that with a sprint on the calendar just a week earlier, we wouldn’t be able to do DA’s Pioneer Power 5k at TWU. Then a few weeks ago they announced a non-sanctioned 5k that would happen at the same event. Short version: we could do the run section of the sprint for about $30.

Posting on Facebook about it, Audra discovered that our friend Teri and her son would run the event as well. Audra registered right away, and it didn’t take much arm twisting to get me to sign up, too. Technically I just had a run workout on the schedule, but the idea of doing my run on a course with water stops and nice volunteers — plus scoring a tech T-shirt and some more Dallas Athletes custom-printed athletic socks — sounded awesome.

The morning didn’t start so awesome, though. We were up a little late the night before, so I set two alarms for Sunday morning, one at 5:30 a.m. and another at 5:45 a.m. (We planned to eat a snack beforehand and eat breakfast when we got back, so there was no reason to get up extra early.) Audra set an alarm, too. But we managed to plow through all three alarms, punching them all off without even noticing. I woke up first, though I have no idea why. Our (brief) conversation:

Doh, indeed. Gun time for the 5k was 7:30 a.m. and we’d planned to meet Teri a little before 7 a.m. We were going to leave at 6 to make sure we found a parking space before they closed roads for the run and bike course, since the triathlon started at 7. So not only did we need to get to the event before start time, we also had to catch up with Teri, who had our packets as she’d been kind enough to pick them up Saturday in an effort to help me make the CPR course after our long ride.

What followed was probably the fastest departure in the history of pre-5k preparations. Hopping out of bed like someone fired us out of a cannon, we threw on clothes (wow, I’m glad I laid my clothes and gear out Saturday night), filled a water bottle, grabbed two rice cakes left over from the batch I made for yesterday’s long ride, hopped in the car, and set a land speed record getting to TWU — just in time to discover that (surprise!) they’d closed the roads for the bike course. A little Google mapping got us around the side of the university, but couldn’t get us to any of the event parking. Thankfully we found an empty space near the run course and were able to high-tail it to the start.

Teri met us at the pool and was about ten steps ahead of us, having not only brought our race bibs, but also snagged our timing chips. So we went from land-speed-record driving and running to the start to all-ready-to-go and hanging out with Teri and her son. Awesome.

The 5k start was pretty relaxed with maybe 50 or 80 people participating. We all sort of wandered around the run exit to the triathlon transition area until a few minutes to 7 when the Dallas Athletes announcer ran over a few key notes, like the fact that we should follow the cart track through the golf fairway to stay on course and that there would be tons of food and drink at the finish. (“If you go home hungry or thirsty, it’s your own damn fault.”) You know, the important stuff.

Around 7, he counted down from 10, hollered “go!” and everyone headed out for the run.

Note: Since my workout wasn’t that extreme, I’d planned to bring my camera and give you some pictures from on course, but alas, I left it at home in the mad dash to the start. Whoops.

I ran into Teri and her son about 3/4 of a mile into the run and they appeared to be having a great time. Audra started slightly behind me, so I didn’t see her until the finish. It was a great run, taking us through the golf course, around through various university paths, and then through a beautiful tree-covered area before looping around back to the same finish used for the triathlon. 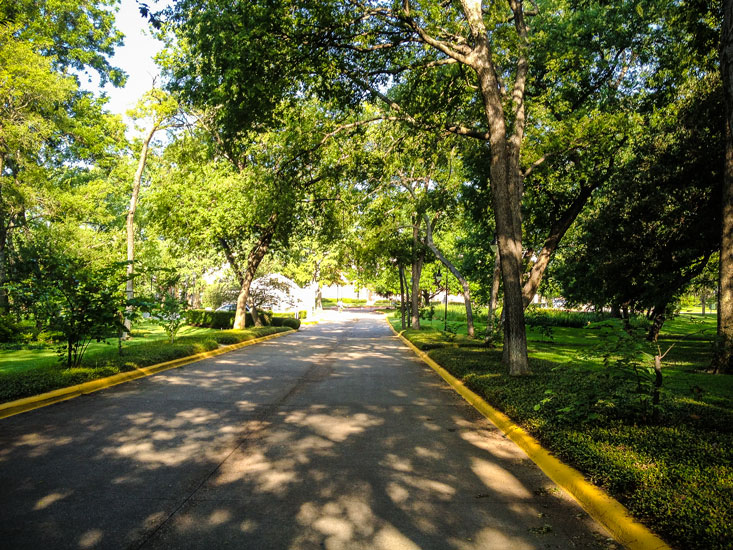 I took this photo on our walk back to the car. Beautiful, no? 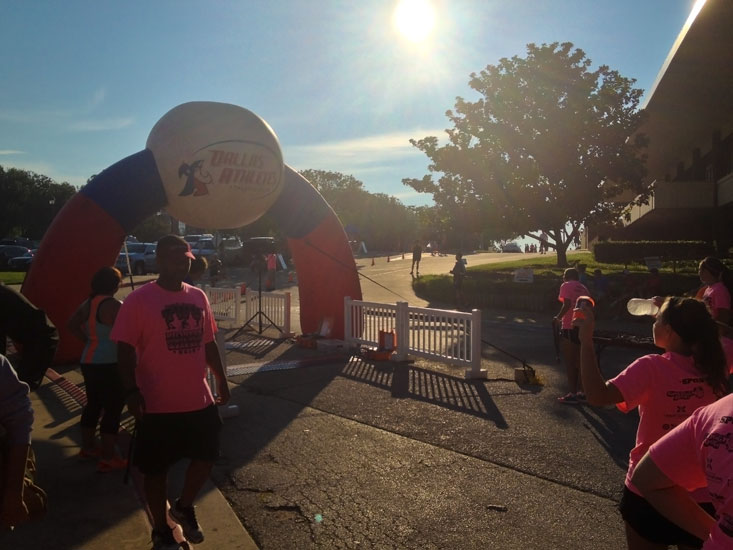 The finish line, taken after my finish and slightly before Audra’s.

My workout consisted of a 10-minute warmup followed by four 30-second strides with 1-minute recoveries, and then repeated 400-meter sprint intervals with full recoveries until the finish. Like with the Wounded Warrior 10k (which was also a run workout day), I did everything like I would normally, but jogged instead of walked during recoveries. (Okay, I actually walked a bit after the last 400 because it coincided perfectly with entering an aid station. Why not?) I made it through three 400s before I crossed the line. My Garmin showed me finishing in 27:16 with an overall average pace of 8:47/mile. 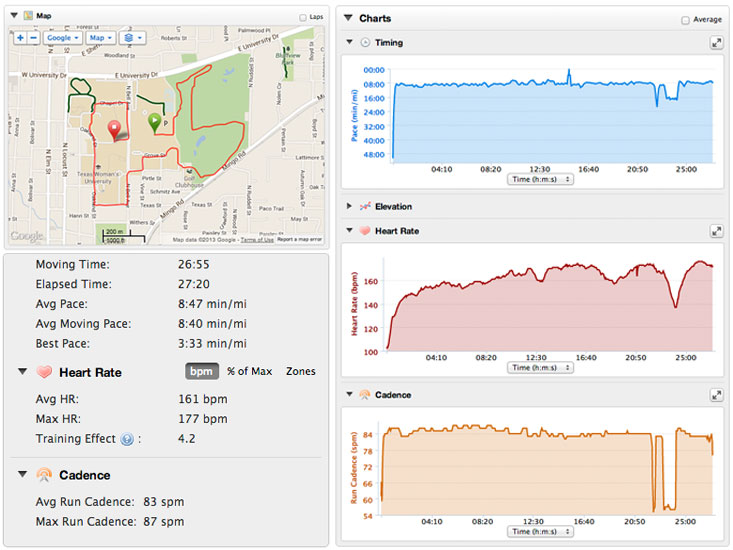 Teri and her son finished just a minute or two later, and I ran into them among the tents set up around the finish area. We grabbed a table and waited for Audra, who finished not long after. 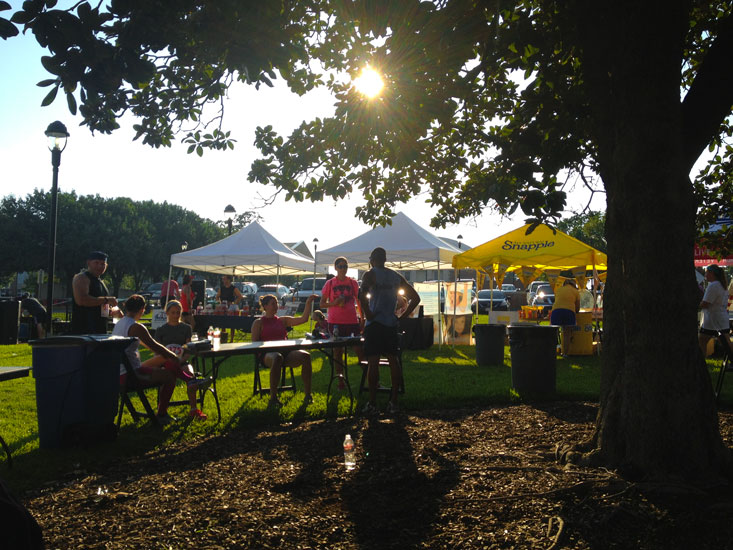 8 a.m. after a run (or tri) w/pancakes instead of beer is my kinda party. 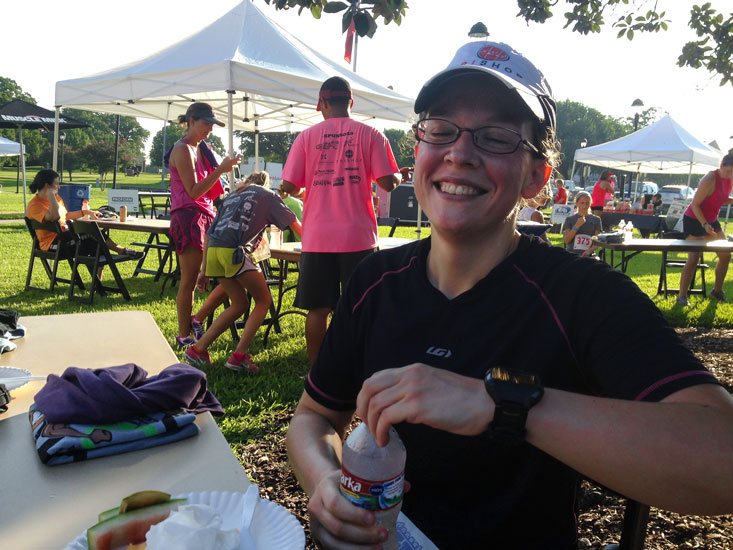 On our way out we all stopped by to look at the “official” 5k chip timing results, which were posted on one of the campus buildings. 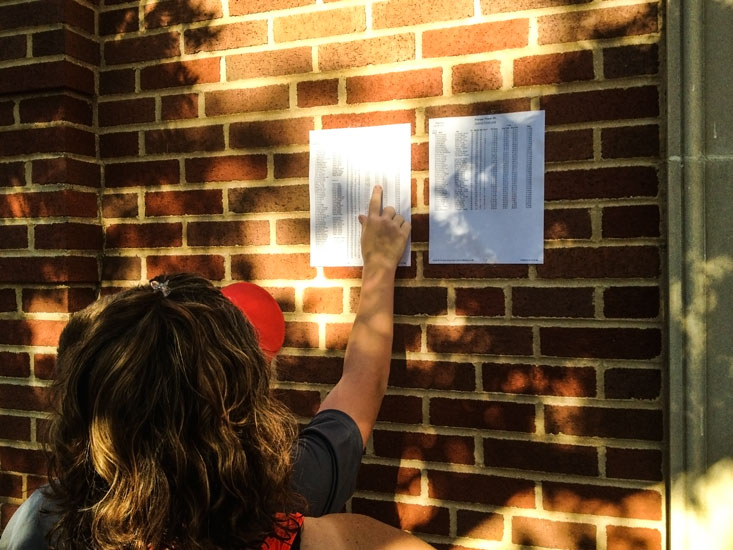 Not a lot of 5k participants.

Entertainingly, my ~28 minute run placed me fourth in my age group — out of six. Even more entertainingly, a guy from my age group won the race, finishing in under 19 minutes, too. So no risk there of me accidentally “winning.” More importantly, Teri’s son finished around 28 minutes as well, which we hear is his fastest 5k to date. Woot!

Afterward we followed Teri back to her car to pick up the rest of our event packet swag. On the way we engaged in a little silliness: 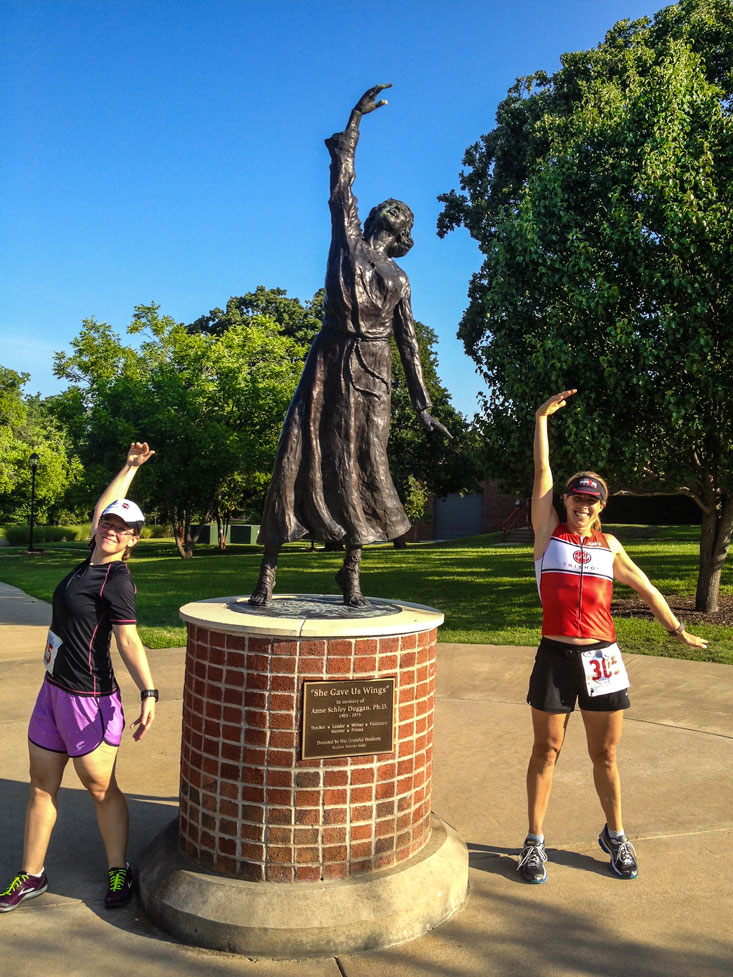 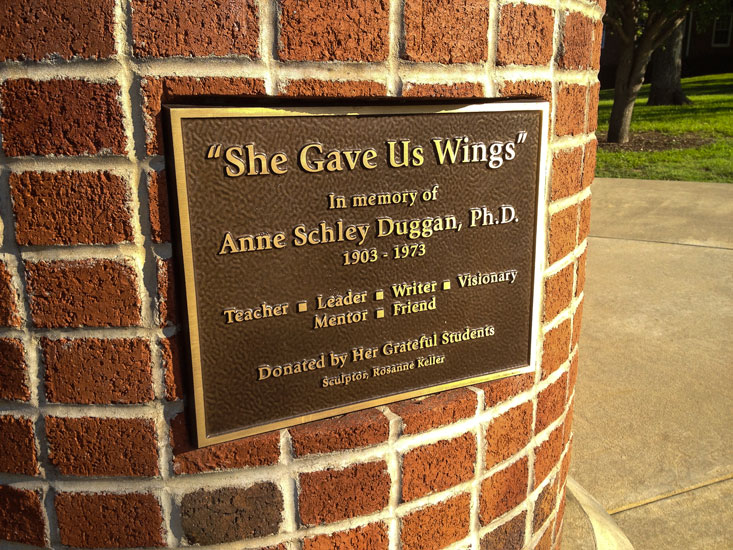 Finally we retraced the run course back around to where we’d parked. As we walked under the trees, Audra and I were both struck by how much more comfortable we felt at today’s event than we did at the first 5k we ran back in 2010. We remembered how uptight and concerned we were that we’d do something dumb, or that we’d feel out of place. We arrived very early, and we prepared meticulously. Even though we hadn’t really trained for it, that early 5k was a positive experience. We ran some, and we walked a lot. But we finished. If I remember correctly, we took something like 47:00 to cross the line. That’s not important. What’s important is that we experienced what it’s like to do something fun and athletic with a whole bunch of people who’re all looking to better themselves and enjoy using their bodies for something other than keeping couches firmly attached to the floor. Obviously neither of us want to repeat today’s clusterfrak of a start, but it’s heartening to notice that neither of us were uptight about the event, or about how we’d fit in. If nothing else, triathlon has definitely desensitized us to this. Like Teri said at one point: “I love run events. They’re so… simple.” 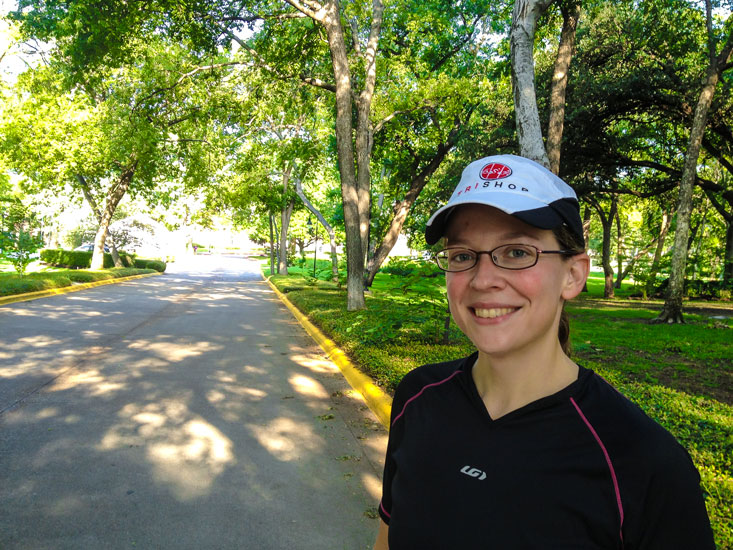 Since we were technically inside the run course, Audra kept watch while I extracted the car to make sure that we didn’t screw up anyone’s run. 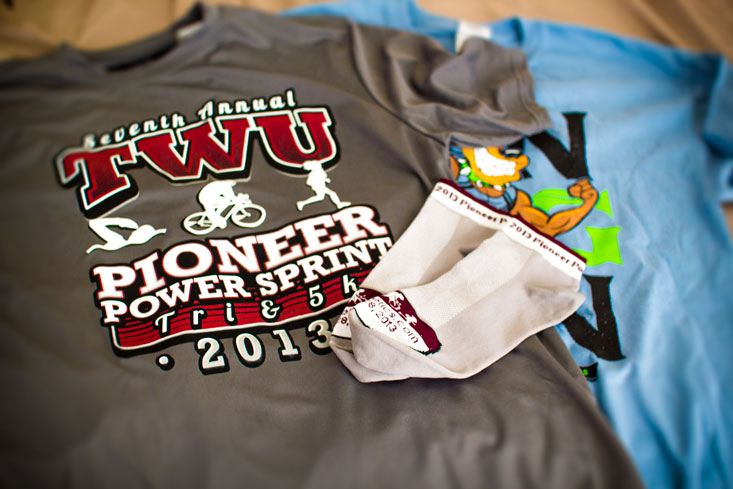 The swag was excellent, especially considering the cost. I love the Dallas Athletes socks.

This was a great event, very well organized and a great course. We all agreed it’d be worth running the tri next year if at all possible. Overall we had a great morning — easily one of the most fun run workouts I’ve had in a long time.