One nasty hard run. One crappy time. One disappointed me.

It might sound strange to hear that I missed running after only four days without hitting the pavement. But when a normal week consists of three runs (one brick, one speed session, and one long run) — and even last week’s micro-taper into the Cooper sprint included four runs counting the sprint’s 5k leg — four days without running feels like a lot. So this morning I was pretty excited about the prospect of running. Today’s workout schedule held a run test: a 5k time trial designed to uncover my threshold pace, which will become the basis for determining all the pace zones used in my run workouts during this training cycle.

Essentially the field-test version of the bike threshold test I did Monday, this test started with a warm up consisting of 15 minutes of easy running followed by four 30-second “strides.” Strides are intervals in which I’m to run as fast as I can without sacrificing form at all, and they’re almost always accompanied by recoveries of the same length as the stride interval. So today, for example, I ran fast for 30 seconds then walked for 30 seconds, then repeated the process four times. Surprisingly, this almost always “opens up my legs” — makes me feel like I’m ready to run faster, even when running faster sounds unthinkable at the start of the session. 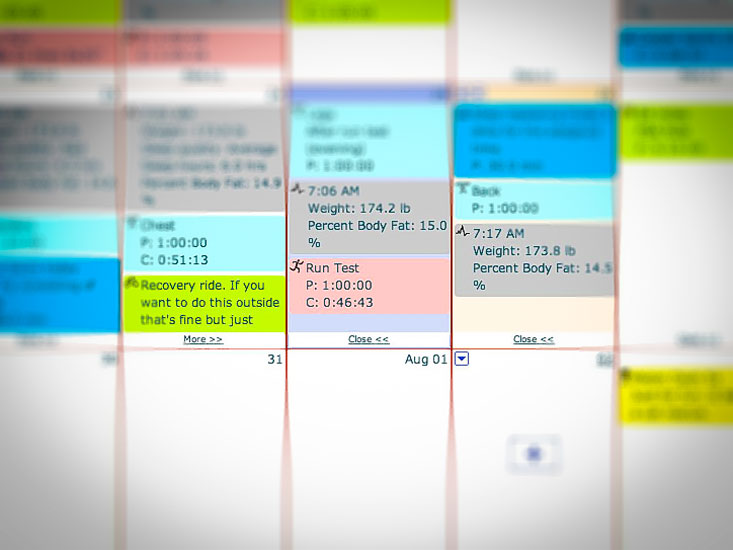 My legs still felt a little tender from Monday’s bike test — especially my hamstrings — but it didn’t feel like anything worthy of concern. My warm up went well, and I managed to time it almost perfectly so that I ended up back at the start point of my 5k course just as I finished the warm up. So with little delay, I punched the LAP button on the Garmin and headed out for the run.

In my coach’s description of the run test, he points out that it’s easy to take off at too high a pace and then burn out far before the end of the test. Like last time, I tried to avoid this by paying attention to the Garmin quite a bit in the first half mile or so in order to establish a good pace. In this case, I shot for around 8:00/mile, or just a little bit faster than the 8:17/mile that I set in my last run test.

The test seemed to go well. I kept the pace in the low 8:00/mile range whenever I looked down at the watch. A couple of times I accidentally slowed down a bit, but never for long. (It helps — for me, at least — to distract myself from the pain and suffering by thinking about random things, like communication theories, future blog posts, or what I’m going to make for dinner. On occasion, this can be too distracting and I might slow down.) Around the 2.5 mile point, I stopped worrying about pace and tried to focus on running as quickly as I could make myself.

Like last time, I felt pretty bad by that 2.5 mile mark, and it just got worse. By the time the Garmin counted down the last five seconds in the test, I was in pain. My stomach wanted to cramp, and I felt queasy. When I stopped, I felt dizzy and actually sat down in the grass for a few minutes. Around that time Audra arrived back from her morning run, and it was nice to have someone there with me just in case. I felt pretty bad. 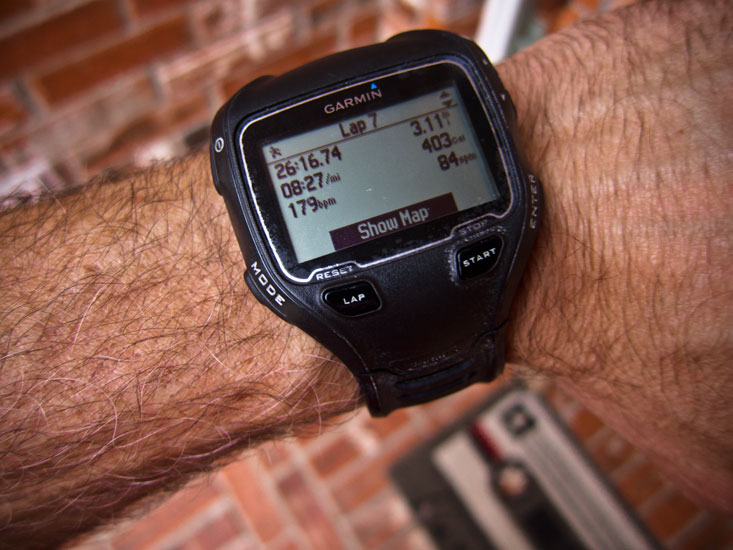 Not what you want to see after 5 min of trying not to puke.

Then I checked out the last lap time, and felt worse; despite leaving all I had out on the course, my 5k was almost exactly a minute slower than my test at the beginning of the training cycle. Ouch.

After some morning meetings, I was able to upload the Garmin data to TrainingPeaks and add notes for my coach. I also posted my disappointment to Facebook, and a number of friends responded with encouragement. As some of them pointed out — and my coach confirmed later in the day — temperature, leftover fatigue from the run test (and the long/hard training from weeks before), stress from the race Saturday, and a lot of other factors could affect this test. The end result isn’t as exciting as seeing a new PR (which is usually likely on a test like this, especially when my run training has been going so well), it’s not miserable, either. I can still meet the training paces based on my old 5k test, so my coach sees no reason to change those training paces. At least I’m not going backward. 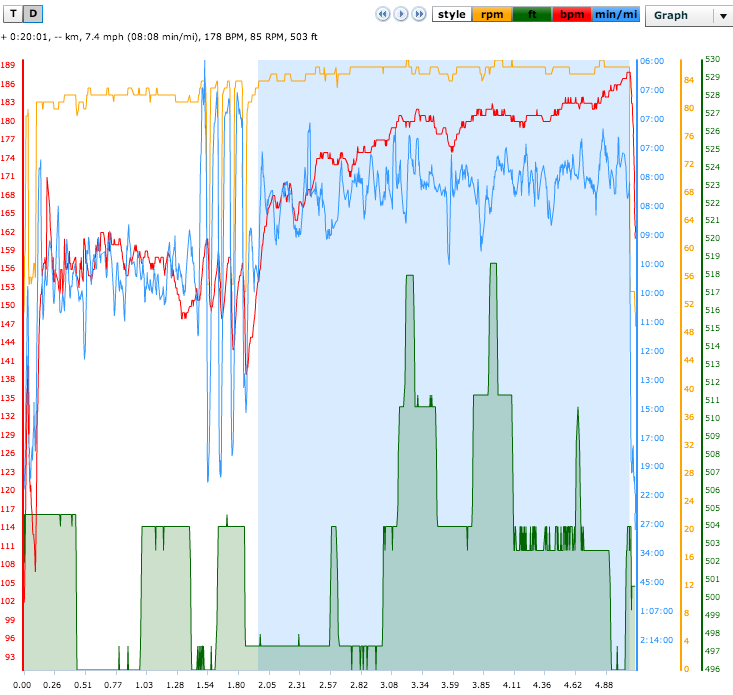 My previous run test from May 10th of this year. 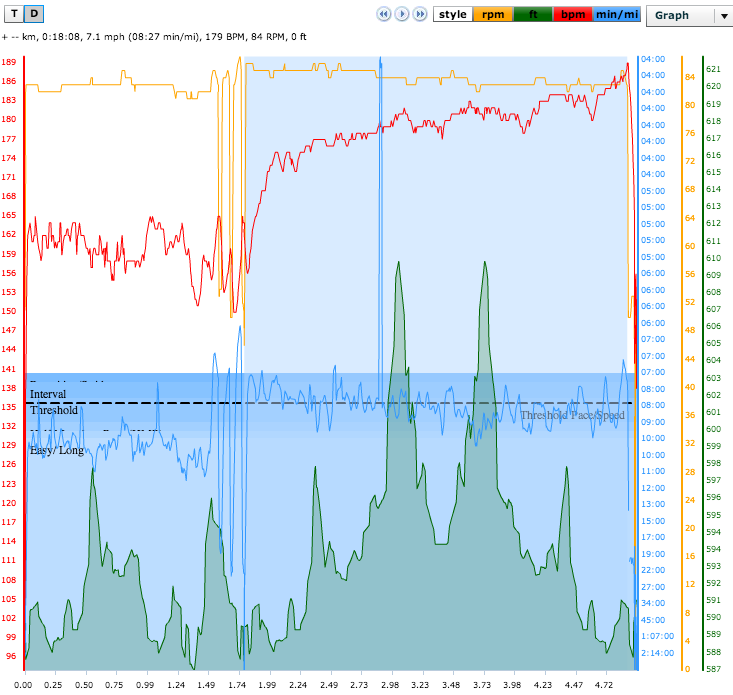 The area in light blue is the run test portion of the workout. On the data from today’s run, I also turned on TrainingPeak’s display of my current run pace zones, represented by the horizontal blue bars. The blue line represents my pace in minutes/mile, the red line represents heart rate in beats per minute, and the orange line represents my cadence in steps per minute. The green area shows elevation, but you’ll note that the altimeter in my Garmin was already returning funky data during the first test back in May. The elevation looks more accurate in the new data because I had TrainingPeaks correct it by matching up my GPS data to elevation maps. The one little spike in pace is probably a GPS error.

As my coach pointed out, these two runs are remarkably similar, and though my heart rate stayed slightly higher this time around, it isn’t really a significant difference. Both efforts left me completely drained, and they both look almost identical in data, except for the fact that this one is a little slower. His take was the same as mine and others: it was probably just a difference in conditions.

Days like today can be a real letdown, but it helps to have a community of nice run/bike/triathlon friends on Runkeeper, Facebook, etc. to help keep your spirits up. It was really nice to see positive comments from them today.

So where does this leave me? Assuming I can continue to make my intervals in the training paces we’re currently using — which I expect I’ll be able to do — we’ll continue using them. And at least I burned ~600 calories this morning. I’m gonna go eat something.