A run through the washing machine brings new life to my cycling and running shoes. No rotting corpse smell means new life, right?

My cycling shoes haven’t exactly smelled or looked wonderful lately. But after soaking up post-blister blood, crappy pool water, and sweat during last week’s race and then accidentally (doh) sitting in my transition bag for a day and a half, they were downright nasty. Think rotting corpse nasty. It was clearly time to do something about them, so I started reading a bit about how to get rid of the stench.

Browsing a bit on the forums at BeginnerTriathlete and SlowTwitch, I discovered split opinions on the best way to clean cycling shoes. One group suggests handwashing them in a bucket with dish soap or other mild detergent. Others advocate power washing via either the washing machine or the dishwasher. A third group believes any wet washing to be deleterious to the shoes’ lifespan and swears by spraying them with various odor killers and antiseptic sprays.

From what I can tell, the primary risk in washing any shoe is in breaking down glue that may be used in the shoe’s construction. Back when shoes were entirely stitched together, lots of people washed them. But after modern sneakers started incorporating lots of glue, it became common knowledge that you don’t wash shoes.

Looking at my cycling shoes, I can’t tell how much glue is used in their construction, but in the end we decided to throw them in the washing machine. Honestly, the decision seemed pretty simple: they were too nasty to continue wearing as-is and there was no way they were going in the dishwasher (i.e. anything too nasty to wear on my feet wasn’t going in the same place as dishes). I figured if they didn’t survive the wash, I wasn’t losing much, since I wouldn’t really continue wearing them anyway.

Having made this decision, I continued to stew over it for a day, during which Audra, realizing I’d worry about it, tossed them in a laundry bag (to protect the washer from the cleats) and threw them in the wash. She included my bloody running shoes, too, because she’s seriously awesome.

I dried them in front of the fridge where the hot air from the compressor coils vents, just like I used to do with my wet shoes when I was a kid. 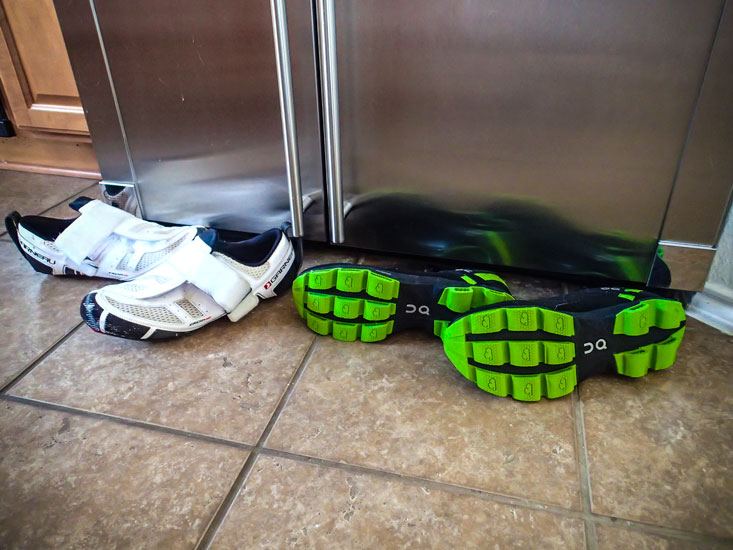 Warm, with a slight flow of moving air.

They survived! They came out looking remarkably decent, and they smell all right — definitely better than before and a whole lot nicer to wear. 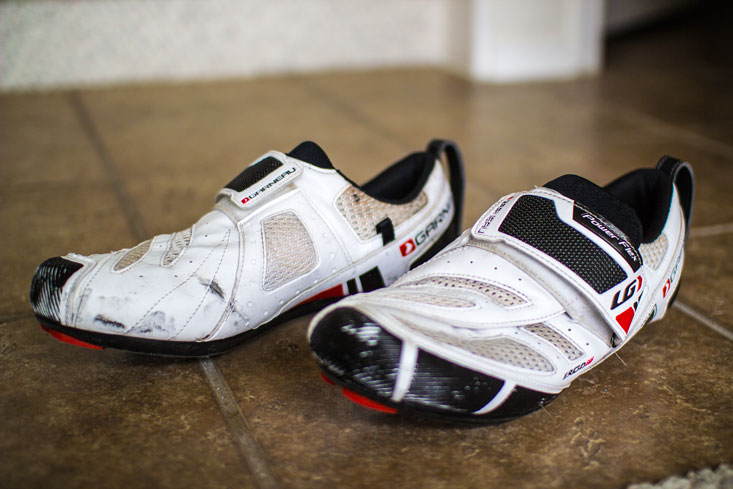 Scuffs remain, but they’re much whiter, and smell 95% better. 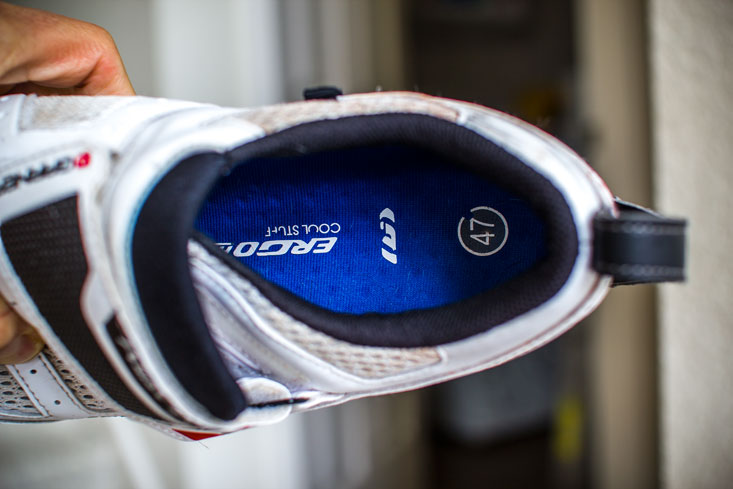 I actually thought the insoles of these shoes were black. Doh.

I bet I can get rid of the scuffs with some leather cleaner if I’m willing to put in the time. It was also really nice to get rid of the salt and sand buildup in my running shoes that was left over from sweating/draining nasty salt water into them during Rocketman — and to knock the dirt/mud off them left over from the brief off-road excursions on the rainy Wounded Warrior 10k course. 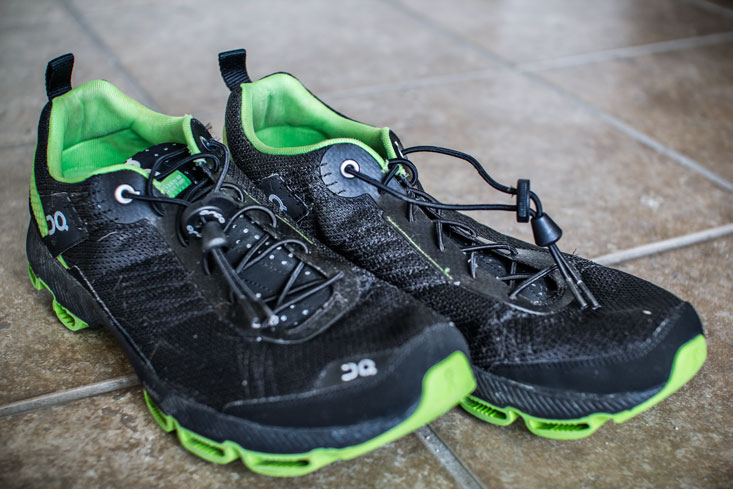 Running shoes came out even better.

I guess I won’t know for a while yet whether or not this shortens the shoes’ lifespan, but they don’t feel significantly different at this point. I’ll let you know. But for now, at least, I’m a lot happier runner and cyclist.