Blood, sweat, but no tears.

When I started training for my first triathlon in January of this year, I trained with a group, which meant that most of the training I did wasn’t that specific to me personally. For example, at one of our first group run workouts, we all did a one-mile run test. The group coaches then presented the intervals during future run workouts in terms of our 400 meter pace (one mile/4), plus or minus a given number of seconds. That way they could lay out workouts for the entire group at once.

Working now with an individual coach, my workouts are entirely me-specific, though we still use field tests to establish the thresholds. These then translate into various training “zones” which my coach can specify in my workouts. Since I don’t have a power meter, we use heart rate on the bike, determined based upon an approximately five-mile time trial I did at Texas Motor Speedway back when I first signed on with my coach. For running, we simply use pace, again based on a 5k time trial over a repeatable course that I run all the time near home.

Recently, though, some of my bike workouts (which showed extraordinarily high sustained HR) have led my coach and me to believe that maybe it was time to do another test. It came up in discussion that our friend Teri (Audra’s swim instructor and also a triathlon coach) had some lactate test strips that were about to reach their expiry date, so the opportunity arose for me to try an actual lab-style lactate test. I jumped at the chance. Not only would it avoid another drive out to TMS at oh-dark-thirty, it’d also be interesting.

The way this works is pretty straightforward. We placed my bike on a CompuTrainer, which looks pretty much like my cheaper magnetic trainer at home, but it can vary resistance in real time according to commands from a little wired handheld controller. Next, I hopped on the bike and, with the CompuTrainer set to very low resistance, spun up to around 90 RPM for a bit to warm up. Teri bumped up the resistance a few times for short intervals as well to help the warm-up.

I’m happy because the test hasn’t started yet.

Once both of us (me and the CompuTrainer) were warmed up, we executed a couple of “spin-down” calibrations which help the CompuTrainer dial in its power measurements. These involve spinning up to a given “speed” on the controller, then freewheeling and letting the CompuTrainer coast down to a stop. After a couple of consistent tests, we were good to go. 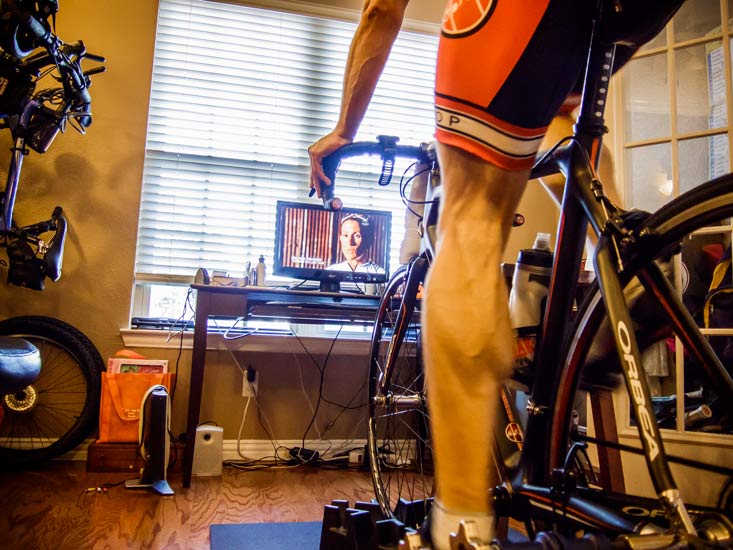 The test itself consisted of starting me off at a nice easy resistance, then stepping the resistance up in relatively even amounts every five minutes. 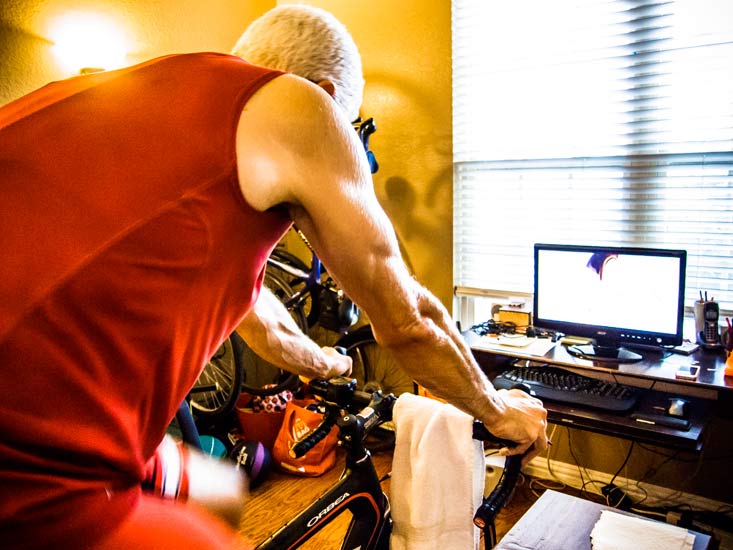 Starting to sweat a bit mid-test.

At each five-minute break, Teri would prick my finger with a little device like the ones diabetics use to draw blood to check blood sugar, then place a drop of blood on a test strip, which goes into a little device that reports blood lactate content in mmol/L. 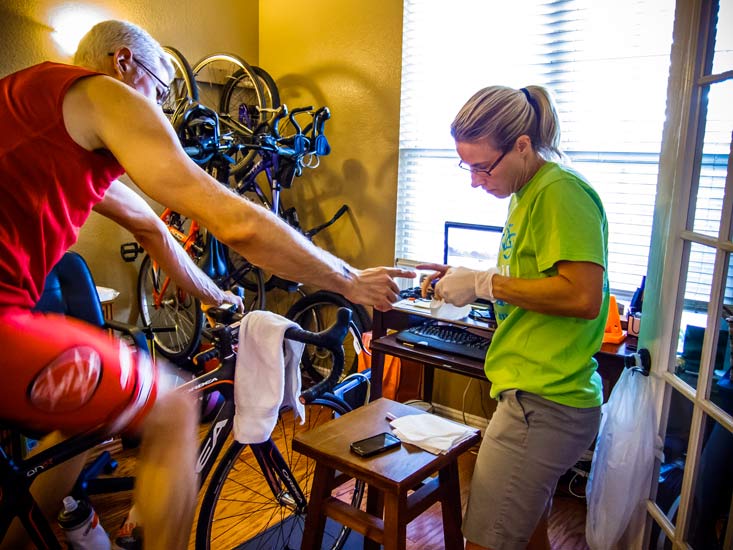 Bleeding for the cause. 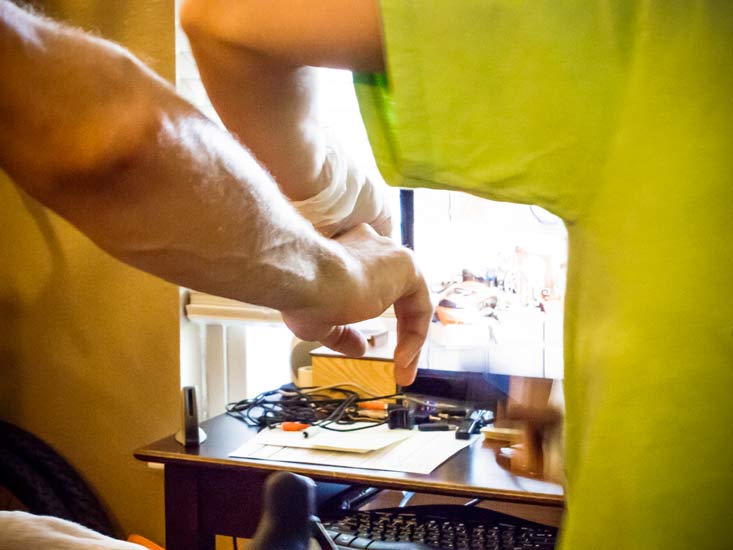 This is fun to do while riding.

She then records lactate content, my heart rate, power level, and my “perceived exertion” (on a scale from 1 to 10) and we roll on. To make things easy, she paired her Garmin to my speed/cadence and heart rate sensors so she could easily see the data. We both recorded the session via our Garmin watches in case we missed something. 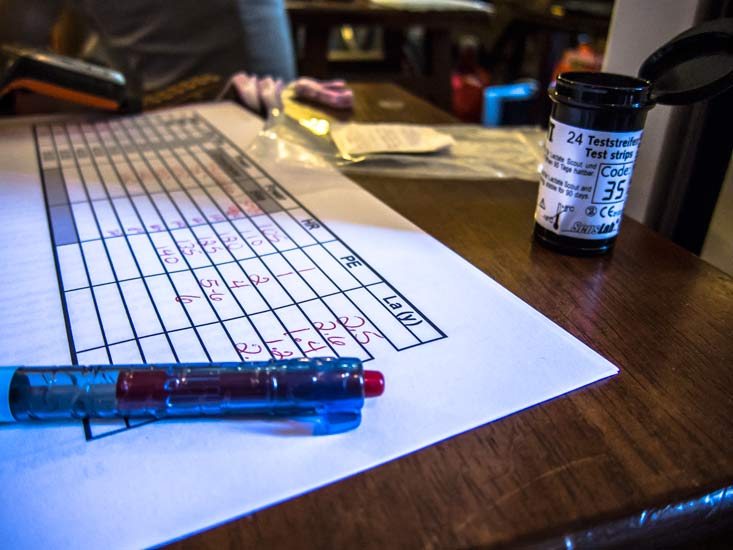 This went on for quite some time. Teri suggested I not talk or get involved in the discussion since it’s likely to change my HR, so while she, my coach Patrick, and Audra kabitzed about the data, I watched Chrissie Wellington stuck on the side of the road waiting for a CO2 cartridge and tried not to think about getting tired.

By the half-hour mark, I was definitely working, and around the 40-minute point the burn started. 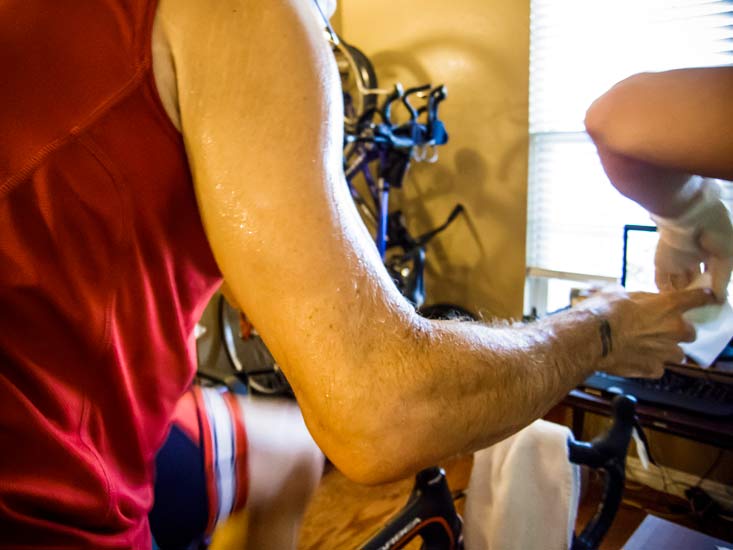 Even with a fan, bike trainers are sweat factories. 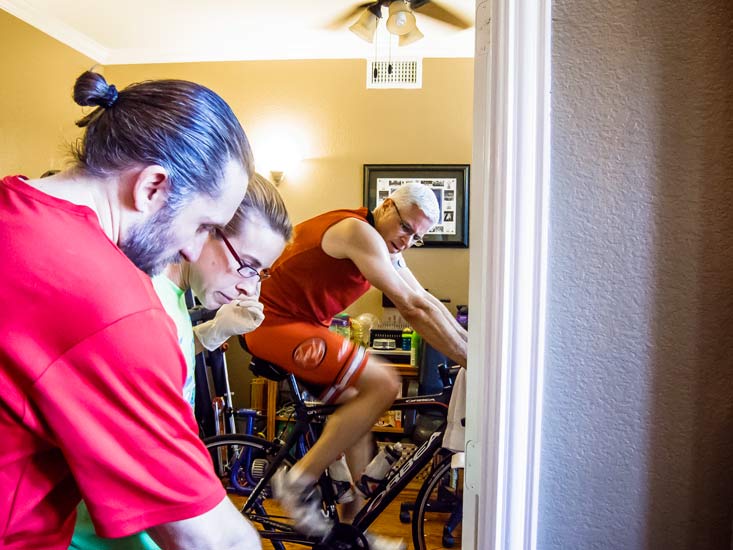 Patrick and Teri look at the data while I suffer.

Audra took this pic not long after what turned out to be my lactate threshold.

Just about at the hour point, I didn’t think I’d make another five-minute cycle — and it seemed pretty obvious to everyone there that I was correct — so Teri backed off the resistance to where it had been set about halfway through the test. The idea was that I’d keep spinning at the lower resistance and we’d test again to see how quickly I recovered. We concluded the test with five more minutes of spinning at light resistance, one last lactate blood test, and five to ten minutes of light spinning as a cool-down.

It wasn’t as bad as I thought, and it definitely wasn’t as bad as my last lactate run field test. After that run test I spent a good 15 minutes trying to use pure force of will to prevent my breakfast from ejecting. This was much more controlled, and I guess that makes sense. Where the run field test involved just dropping a 5k at top speed and then falling down dead, this started slow and just ramped up smoothing and steadily. Looking at the data, it’s tempting to think, “Why could I only handle five minutes at X resistance?” But that fails to take into account the 40 minutes prior at every resistance in between. It’s like pyramid lifting at the gym: you might be able to bench 240 for 10 reps fresh, but try doing everything from the bar up in 20 pound intervals before that 240 set. It’s a much different experience.

I couldn’t see the numbers during the test, but in hindsight I could feel when we reached the threshold. Around 45 minutes into the test I started really feeling it, and Teri noticed the change in my breathing. (You can see in the results below that she added a couple of asterisks at that point.) From that point onward, the burning came on pretty strong. In the last five minutes before the resistance came down, it got tougher and tougher to make myself keep going. My legs were on fire.

I’m certainly not prepared to interpret these, but here are the results, which seem to indicate a lactate threshold of 155 BPM/155W and a functional threshold power of 200W (as measured from the CompuTrainer). (Note that this FTP is just interesting. It won’t do me much good unless I do a similar test on the CompuTrainer later, in which case the comparison might be useful.)

From here I’ll send these over to my coach. He’ll take the threshold numbers, plug them into TrainingPeaks, and use one of the many calculation methods TrainingPeaks offers to back into my various heart rate-based training zones for the bike. One thing’s clear, and that’s that my zones aren’t going to change nearly as much as I thought they would. A quick email exchange with my coach today confirms that the higher heart rates I’ve experienced may well be due to other external effects, such as excitement, exceeding lactate threshold excessively earlier in the workout, or a variety of other reasons. And apparently it’s not that common for some folks to exceed lactate threshold for good portions of short events like a sprint tri.

Besides looking for my new training zones, I have a mostly-drills swim on the schedule tomorrow, a recovery ride on Wednesday, and a new lactate threshold pace field test for running on Thursday. Long rides resume Saturday with an 84-mile bike, and I’ve registered for a 5k for fun on Sunday (which will actually be just a supported run workout). It’s only a short distance from our house, and more importantly, you get a cool pair of custom-printed socks for competing. Plus there’s a sprint tri happening at the same time, so we’ll get to see friends. Awesome.