Getting Friendly With Rain Taking Preparation to The Next Level

Coffee, chocolate, peanut butter, cold ice — how could this drink not refresh and replenish after a summer workout?

During the height of our weight loss, both Audra and I were running pretty large calorie deficits. That meant we didn’t really have a lot of calories to work with during the day, especially when we were already spending as many of them as possible to have some normal-seeming major meals. That left pretty much nothing for snacks — or for a Starbucks habit. Audra especially liked the Mocha Frappuccino, so like with many of our favorite meals, I set off to create a version that fit within our dietary needs. Thus began our various homemade frozen coffee drinks.

Of course, the drink you see here isn’t exactly low-calorie. Since I’m no longer looking to lose weight — or at least only very small amounts from time to time — I just scaled the drink up to make it more of a meal than a snack. The 72 oz version here checks in at 408 calories, but you can easily adjust this to your needs. (For example, a 20 oz version would yield around 118 calories.) In fact, it’s so easy to adjust the drink’s overall calorie load, nutrient ratio, and size, that it’s quickly become my favorite recovery drink, especially in the summer when the ice in it really helps to bring down core temp after a long, hot run or ride.

The chocolate in this comes from the protein powder. After trying a bunch of different brands, I prefer Dymatize’s Elite Whey, but if you’re a 24 Hour Fitness member, you can often get deals on their Apex brand whey protein, which is also good. They taste pretty similar, and they’re both quite good. The biggest different, in my opinion, is that the Elite mixes a little easier. Honestly, though, in the small quantities you’ll find here, you don’t have to be too picky. Whatever chocolate protein you’ve got is fine. 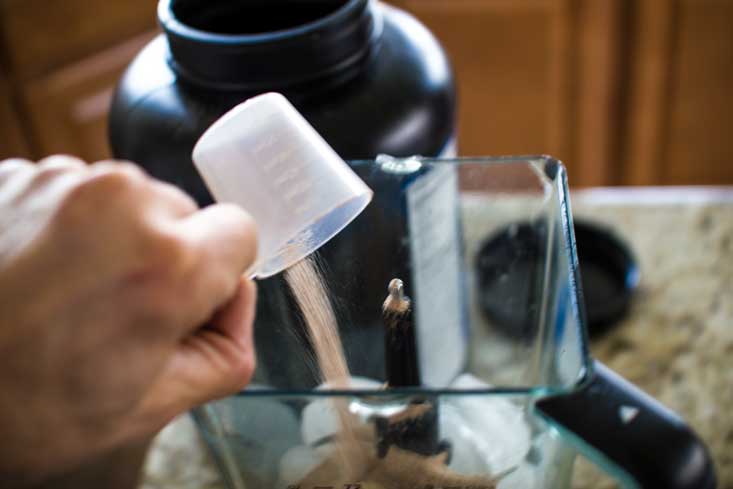 PB2 is a peanut product made by Bell Plantation. They make peanut oil, and they get it by squeezing it out of the peanuts. PB2 is what’s left after they extract the oil. Besides the fact that in this powdered form it mixes really well, it also has a lot less calories than peanut butter, and a lot less fat, too.

Note: If you look around on the ‘net, you’ll find a lot of people screeching about how dumb it is to eat low-fat peanut butter. In general, I agree with them. If you’re just going to eat peanut butter — like, for example, in a PB&J sandwich or something — the low-fat stuff doesn’t make a lot of sense. Most athletes, whether triathletes, runners, bodybuilders, or whatever, are careful eaters, which means that the prime reason they eat peanut butter (besides the fact that it tastes awesome) is to add fat to their diets. Low-fat PB, therefore, just doesn’t make sense. I content that PB2 serves a far different purpose. I use PB2 for situations where either a) there’s a cooking benefit to the powdered form or b) I just want to add some peanut flavor to something and don’t need the fat. I keep standard peanut butter right next to it on the counter and eat it for fat. 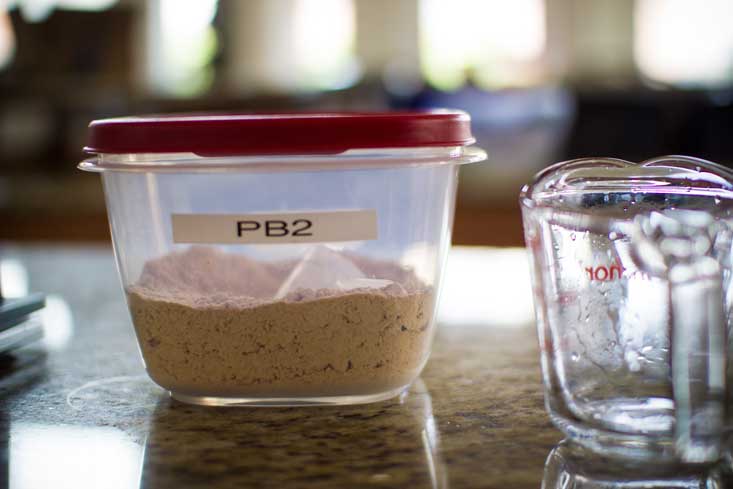 I buy PB2 in bulk, so I store it in a plastic kitchen container.

Anyway, you can find PB2 at some health food stores and specialty grocery stores or via Amazon.

You’ll also hear a lot of negative talk about artificially sweetened fat-free yogurt like the Dannon Light & Fit. Again, I generally agree. For just eating, I prefer Greek yogurt, and though I like fat-free yogurt (I get my fat from other sources), I’d choose Chobani, Oikos, or any number of other yogurts before the Dannon. But for smoothies, the Dannon’s smooth texture and sweetness work wonders. We buy it by the tub just for coffee drinks and smoothies.

This recipe doesn’t contain any indivisible items (like eggs), so you can make various amounts of this drink simply by varying the volume of ingredients while maintaining the ratios among them. For example, just divide them in half or in quarters. But you can also tweak the nutrient balance by varying the amount of protein powder, yogurt, and/or almond milk independently. A couple of things to consider when doing so:

You can add up to 15 grams additional protein powder (to the above ratio) without any real effect on the drink’s consistency. Adding protein powder after that will make the drink noticeably thicker, and once you cross the 60 gram total point, you’ll find that the drink will start to get foamy. Still, that’s a hell of a lot of protein.

Making the drink with much more than 300 grams of yogurt will also cause foaming. Generally if I want a more carb-laden drink, I’ll remove protein powder rather than add more yogurt. Or I’ll just make a fruit smoothie. But if you do remove a lot of protein powder and discover that you’ve lost the chocolate taste, you can add a small amount (~5 grams) of unsweetened cocoa to get it back. Keep in mind that a little cocoa goes a long way.

I suggest adding the yogurt after the protein powder and PB2 because the yogurt covers the powder and keeps it from getting stuck to the blender lid when everything gets flung to the top when you first turn on the blender. 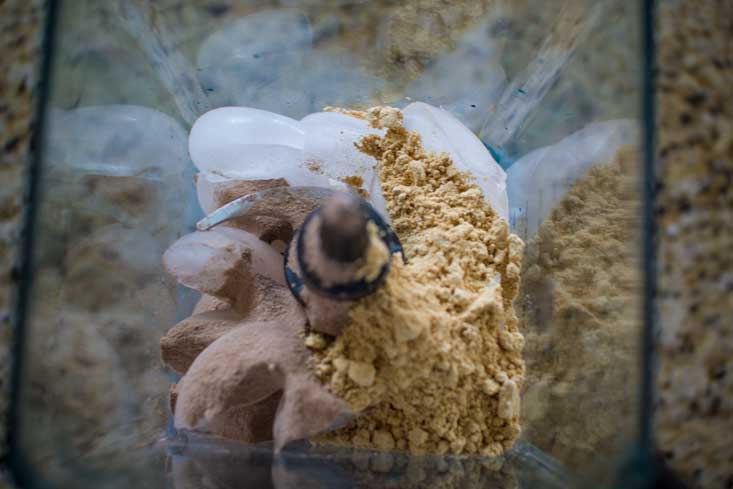 Powder in the blender ready for yogurt.

You can also increase the volume of the drink by adding up to one whole cup more almond milk. Then again, 72 oz is pretty damn big already. Removing almond milk will slightly reduce the fat content, but once you drop below approximately 1-1/2 cup total almond milk in the drink, it’ll get pretty thick. 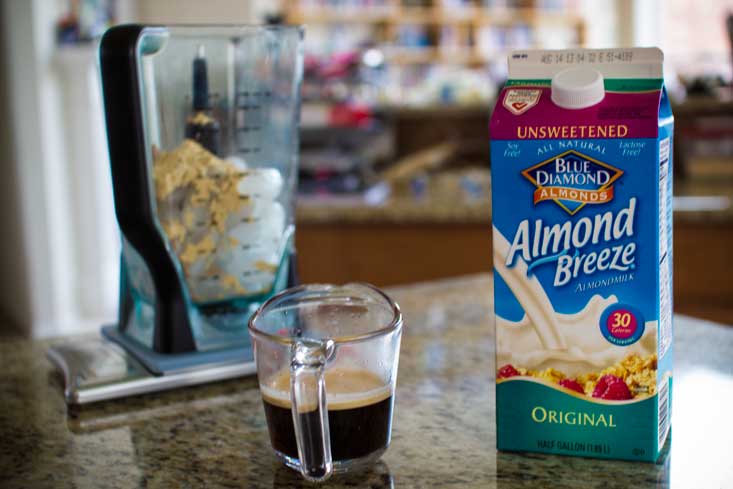 Adding the cold milk to the hot espresso keeps the espresso from melting the ice before you blend.

I stick my measuring cup right my espresso maker, but you can also use an Aeropress. Either way, you want to end up with about 1/2 cup of espresso. 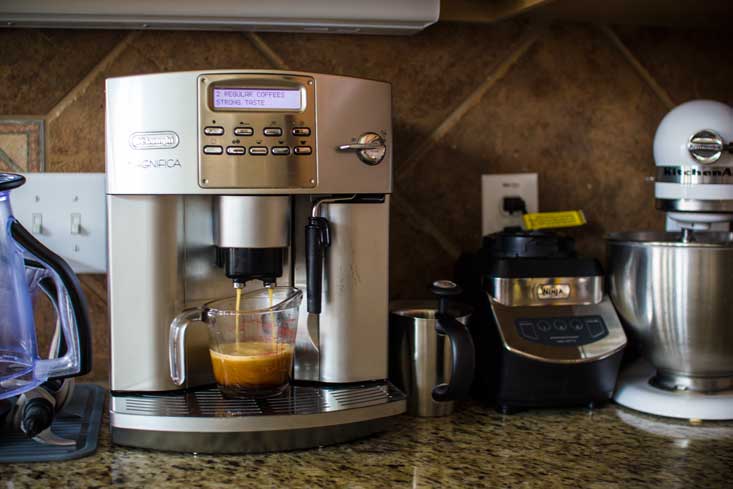 Making espresso. That’s the base for the Ninja to the right of the espresso machine.

I love this drink after hot runs or rides. It does, at least in this large form, fill your stomach up a lot, which means you’ll be pretty sloshy immediately afterward. So it’s not a good idea to pound one of these down pre-workout. If you plan on drinking one in the wintertime, you might also want to have a blanket on standby. This drink really does cool you down fast. As you can see in the picture, I often add 15-25 grams of peanut butter (and sometimes a banana) to end up with a ~550-650 calorie post-lifting meal.

Finally, and most importantly, don’t be afraid to experiment to find the perfect mix for your needs and taste. And if you like the results, drop a comment here. We’d love to give your version a shot, too.