Getting Friendly With Rain

It’s one thing to hear about riding in the rain. It’s another to actually do it.

I’ve always considered it lucky that Audra and I started our tri training in the wintertime. Back during January we signed up for an introductory program leading up to a sprint, which meant that we spent a good bit of time running and riding in the cold weather. It was definitely a learning experience. It’s one thing to know academically that it’s possible to ride in the cold, but only getting out in it–in a variety of conditions with varying success–shows you what it really feels like, and most importantly what you need to worry about and what’s not a big deal. This weekend I got a good introductory lesson of the same type for riding in the rain.

Friday afternoon I got a text from my friend Mitch letting me know that he was up for running and riding this weekend, but that he was stuck with an appointment in the early afternoon on Saturday. I figured that’d work out great since I’m still training toward my first century ride in August and my first olympic-distance tri in October and had a 72-mile ride on the calendar — a ride that’d be a whole lot more fun with some company. Plus, Mitch is signed up for the same century, so it’d be nice to get back on the road together. We agreed that any problems on the ride might push his time limit on Saturday, so we agreed to ride Sunday. I bumped back Sunday’s run to Saturday. Awesome.

Of course, it rained on Sunday.

While getting wet didn’t sound all that great, the idea of spending hours on the trainer inside sounded even less fun. Don’t get me wrong; the trainer is awesome for interval workouts. It’s convenient as hell. But there’s something really satisfying about going places on the bike that I just don’t get on the trainer, and neither of us wanted to give up a day of going places. So we decided to head out the moment the sun was up enough to render us visible to traffic, hoping we’d somehow beat the majority of the rain.

Nope. About 10 minutes into the ride it started sprinkling–which feels pretty good, actually–and within 20 minutes later it was all-out raining. It rained for the entire five-and-a-half hour ride.

During the tri program and rides with other groups, Audra and I have been lucky enough to receive a good bit of instruction on riding in the rain. Some of the tips we received were pretty obvious, like slow down and be careful cornering. Others were less obvious, but just as valuable, like watch out for painted lines on the pavement–they’re slick. Very true. Today I discovered a few more.

For example, mud–even a microscopic layer of it–turns a smooth road into greased glass. Our route took us along streets from our northern suburb into the downtown Dallas area, at which point we made a loop around White Rock Lake, an area prone to flooding. 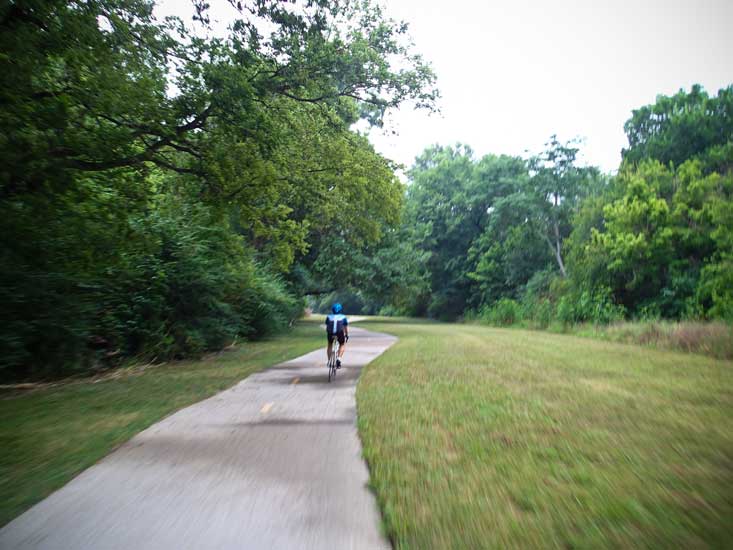 Wet, yes. But quiet and peaceful, too.

None of it was flooded at the time we rode, but recent flooding had left a thin deposit of silt on the road in one spot. Some of the (probably numerous) other cyclists who wiped out there were still recovering on the side of the road when we rolled up, and they jumped up and down and waved at us to slow down. We managed to get stopped without eating pavement, but even during the 20-30 feet it took us to get stopped we managed to pick up enough mud and crap on the wheels to gum up brakes. Worse yet, riding on the road was impossible, and the grass on the side of the road was already too soft to ride on as well. So we had to dismount and carry the bikes a good ways before the road was accessible again.

Bonus: right about the time the road cleared up, we came upon a group of portaloos set up for a local 5k/15k race that was still going on the roads by the lake. (White Rock Lake is a popular destination for races. Audra and I did Tour De Fleurs last year along parts of this route, and one section that we ride on regularly now was part of the Dallas Marathon.) With paper towels from the handwashing station there, we dug the mud and grass out of the brakes, wiped off the wheels, and were on our way.

The race was called “Too Hot to Handle.” It was 72 and raining.

In terms of clothing, it seems like the “less is more” adage applies especially to road cycling. We saw people all bundled up in rain gear, but both Mitch and I agreed that it wouldn’t have really done us much good. We’ve both soaked our standard cycling gear through with sweat before to the point where you could wring it out, which wasn’t much different from it getting soaked through in the rain. Maybe there’s something else here for me to discover, but unless it’s cold, it doesn’t seem worth the trouble.

Anyway, we had a great ride regardless of weather, and now we have a great route to get to some cool stuff downtown by bike. 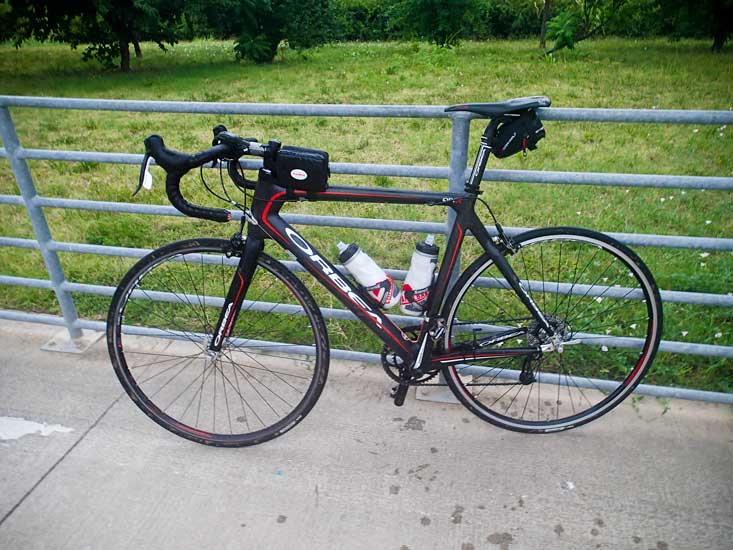 My buddy, which needs a wash. 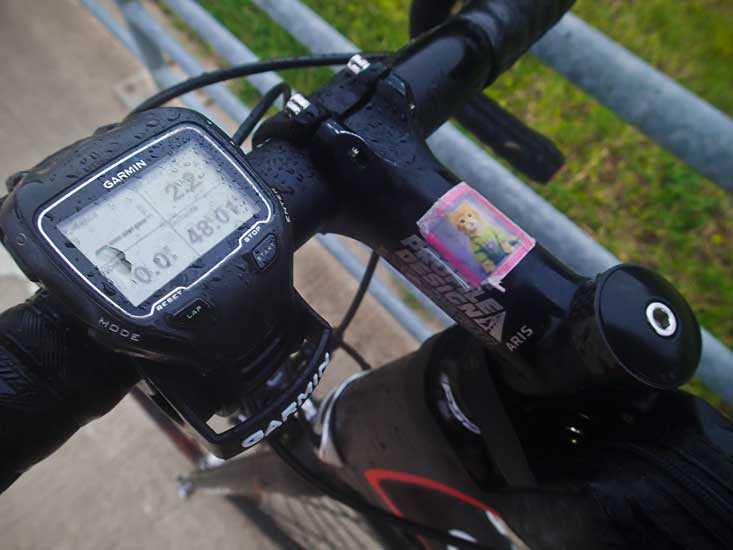 Nigel keeps things bright, even on a gray day. 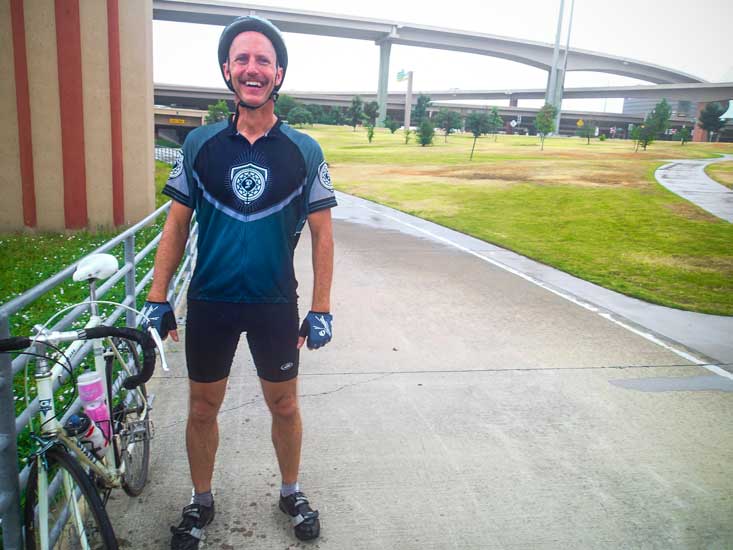 Mitch under the “high five.”

I knew from past (short) rides in the wet that it requires a bit of concentration to keep your center of gravity all lined up, but what I didn’t realize was the toll that concentration takes after a few hours. The twisty little trails were the worst. In sections they were slick, and it seemed like we were constantly turning. It was tough to get much above 12 mph, which made it slow going. Roads were a lot better, so when we had the chance, we stuck to the roads. Still, though the ride was slow and therefore less physically taxiing, it wore me out mentally. I was definitely glad to get home, get a shower, and settle into bed to watch stage 14 of Le Tour. 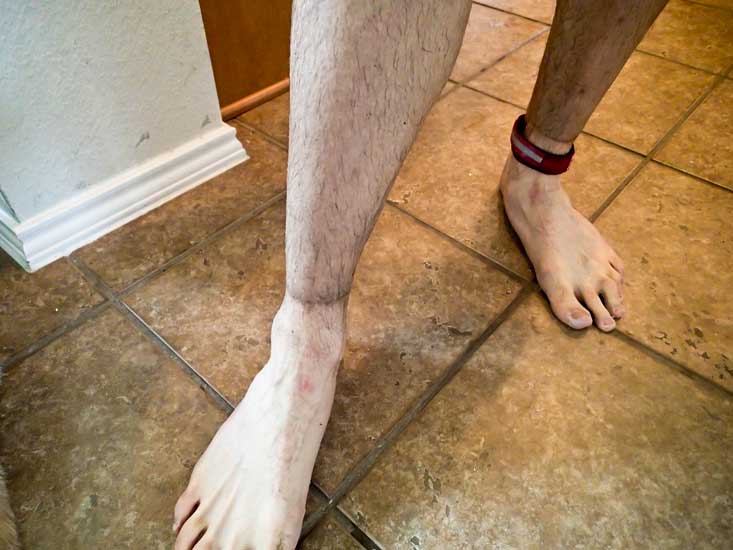 The bike wasn’t the only thing to get filthy dirty. Yes, I was wearing socks. 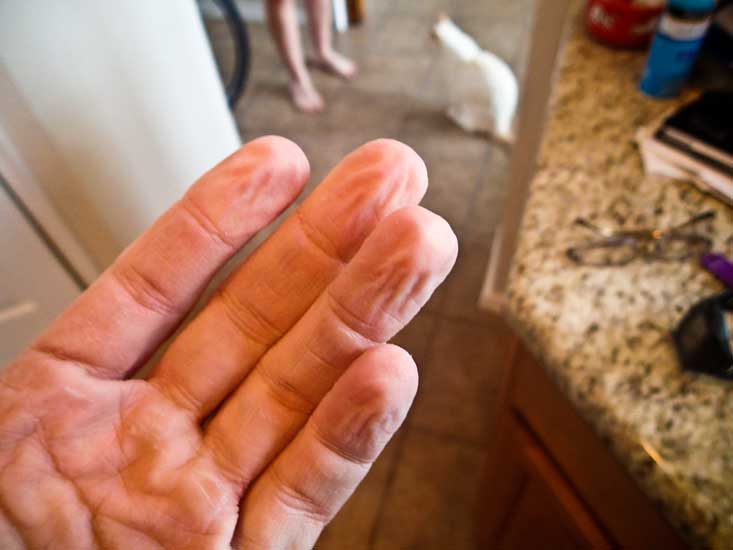 Apparently one prunes up when one rides in the rain for 5-1/2 hours.