Even concrete jungles offer green spots and great places to ride and run. You just have to find them.

The Dallas suburb where we live consists mostly of a big grid of well-maintained roads designed more to ease the pain of driving from home to work and back again than to provide beautiful biking routes. But as we discovered recently, you can find a little scenery — assuming you know where to look.

While temperatures topped out near 100F today, Audra and I took advantage of lower early morning temps to grab a quick ride to our favorite local coffee shop. (Not only is the espresso not bad, but they also carry the same unsweetened almond milk which we drink at home. They’re also friendly and not stingy with cold water refills for riders.) There’s something really awesome and freeing about riding in the cool morning air. Audra pointed it out as we talked over some frozen drinks: since we provide all the go-power, it feels like we could just ride all day. 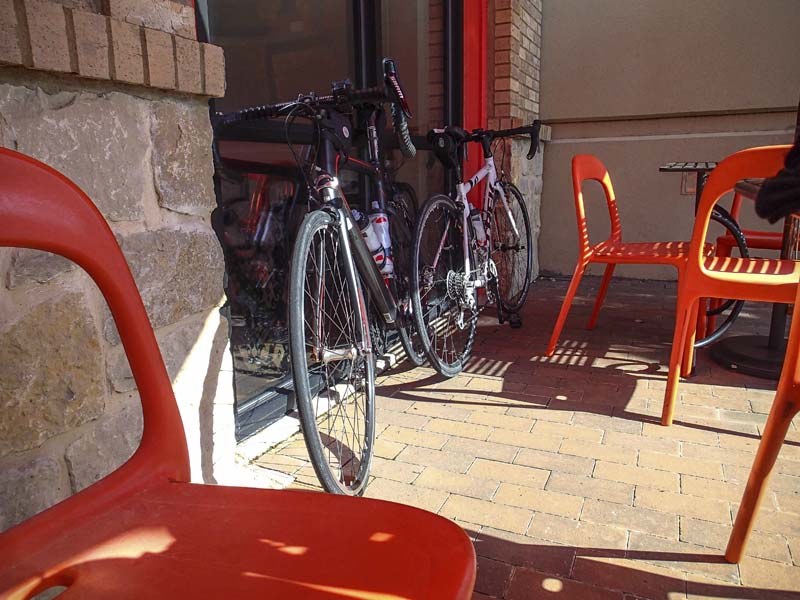 Leaning the bikes against the window means you can see them from inside. 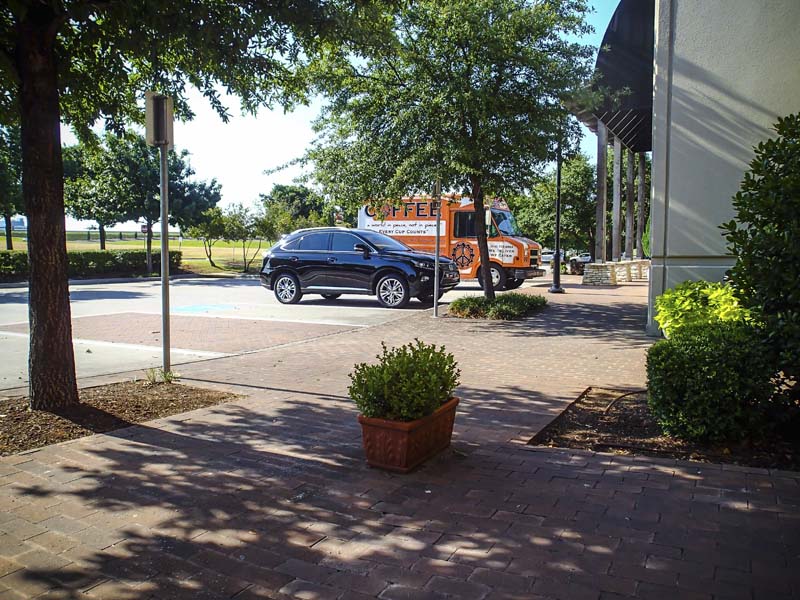 My view from our table.

The shop’s about 10 miles from home, and normally we just make a quick run down, get some coffee, and head home. But today we couldn’t bring ourselves to turn back while it was still cool, so we headed a tad bit further South and added in a couple of loops around a small trail Audra found with a friend a few weeks back.

See, not everyone wants to look at concrete all the time, even if most people do want the convenience it brings. So while every road isn’t shaded by old trees here, some of the more well-off folks (or at least their homeowners’ associations) go out of their way to build trails to simulate the effect. These trails often pass behind high-buck houses, allowing them to serve the dual purpose of offering protected, pretty running/riding facilities and beautifying backyards.

The route we took today zips through a ritzy suburban neighborhood complete with a small man-made lake. 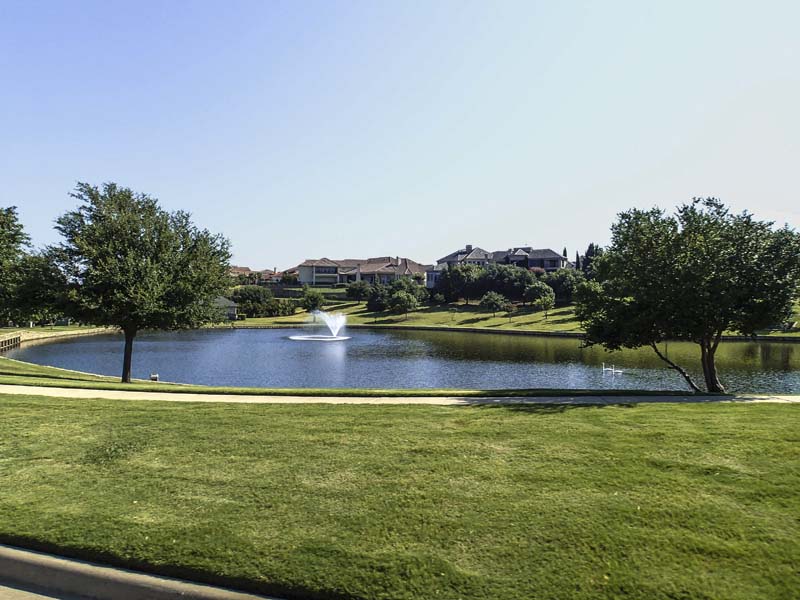 Note the two swans. You can’t buy this kind of beauty. Or maybe they’re LoJacked.

It doesn’t look all that different from other neighborhoods in the area, except, of course, for the high-buck houses. 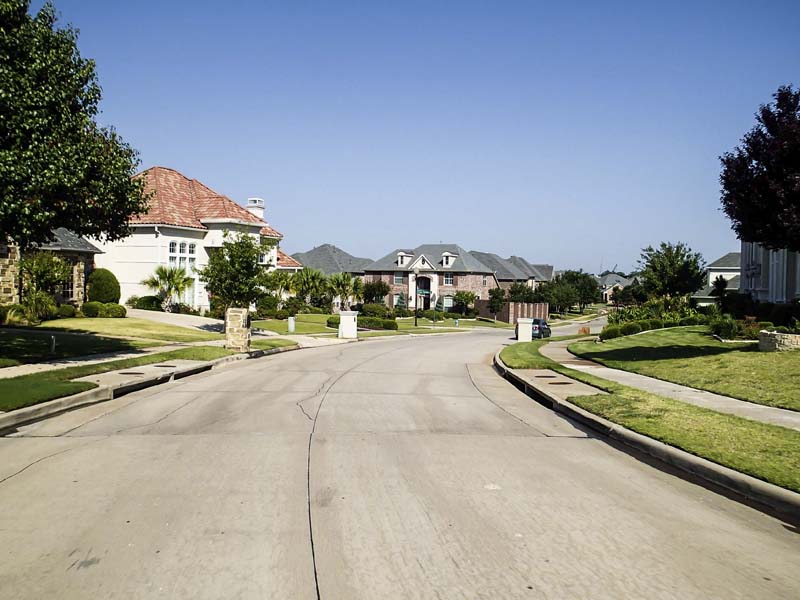 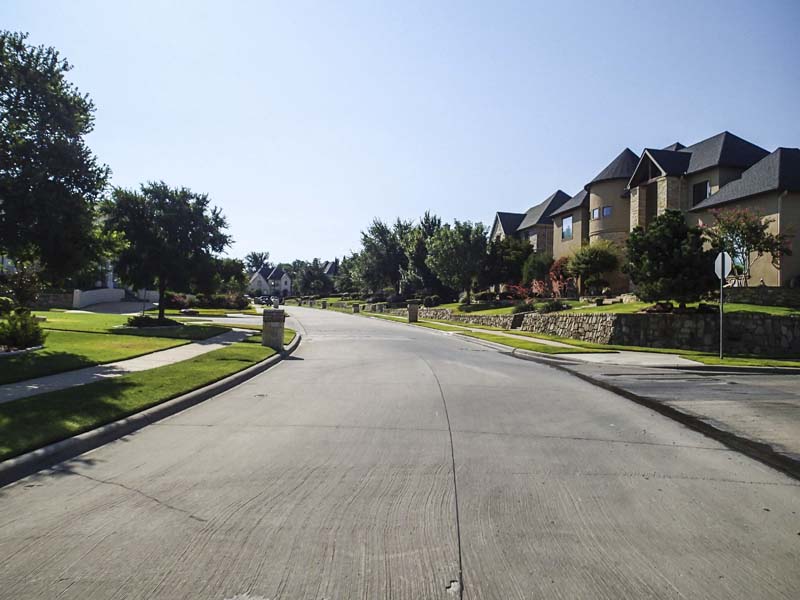 I’ve seen these neighborhoods dozens of times. All but a few of them are publicly accessible (read: not gated communities), but it never occurred to me look for trails — at least not before a) Audra and I started riding more, and b) we met our friend Teri, who seems to habitually explore. Here’s what lies just off the road in the same neighborhood: 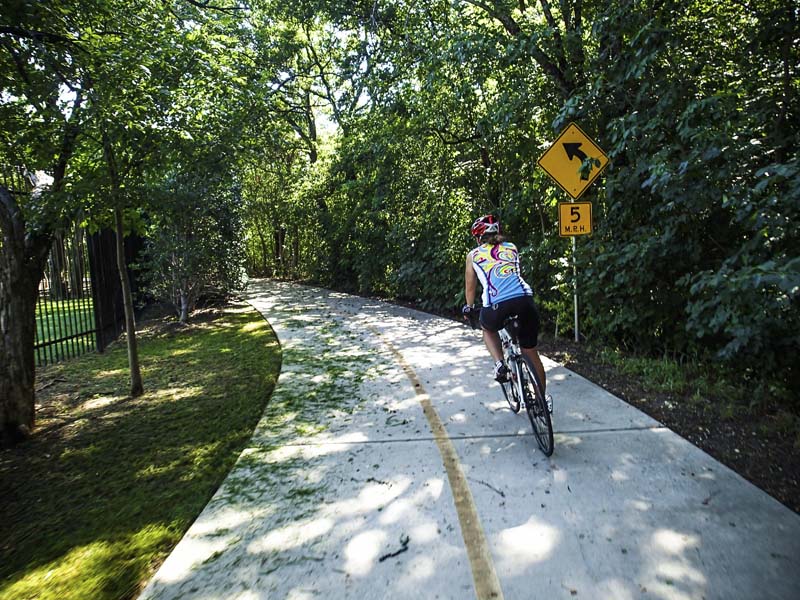 It was apparently “trim your trees and weed” day in Plano.

Even though this path passes almost directly through the backyards of million-dollar homes, it’s open for anyone’s use. It turns out there are many such trails around the Dallas side of the metroplex, some nicer than others. In fact, many of them are visible on Google Maps. Sometimes they even connect together into larger trail systems with names. 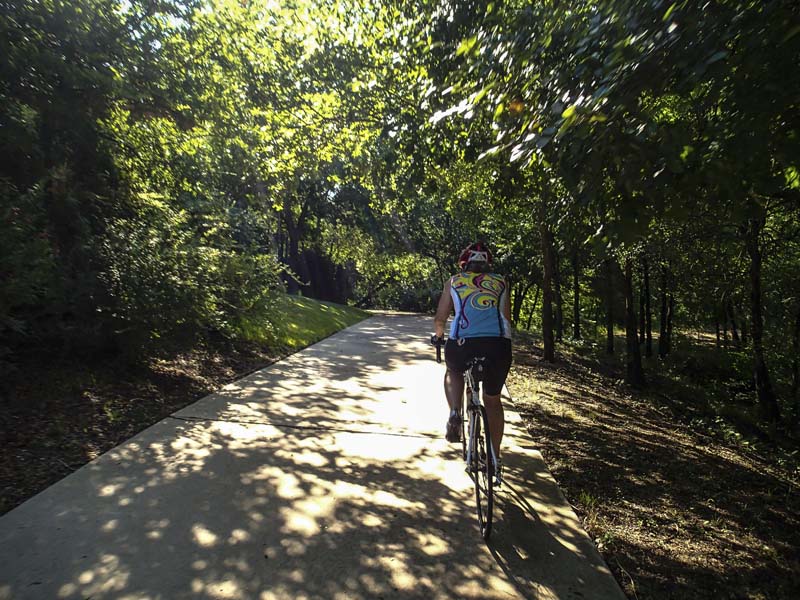 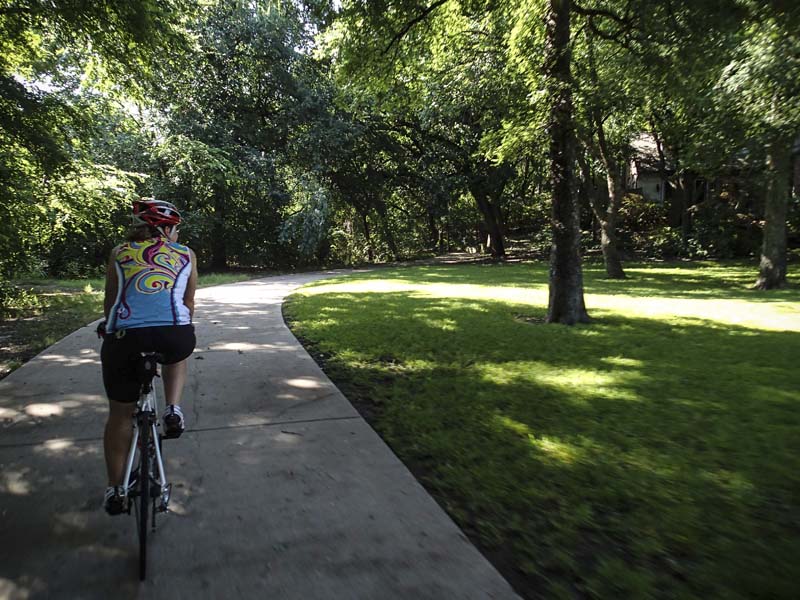 The path we rode on today has a name (the “Shady Brook Trail”), but doesn’t really connect to anything else. Still, it makes for a nice little loop — especially when all you really planned to do was go get some coffee.

When I first got into running, my friend Kerry pointed out that the reason he loves cycling so much is that it’s easy to go places, especially for those of us who’re fit enough to get moving but not necessarily speed or endurance demons. A one-hour run for us means maybe six miles, but an hour on the bike takes us 10 to 20+ miles, depending on the wind. Plus, it’s way easier to develop the ability to ride 40 miles than it is to run 10. What he was getting at is that it’s pretty easy for almost anyone to explore via bike. He’s right.

Teri introduced us to a number of trails, but more importantly, she’s infected me with the exploration virus. On non-workout rides, it’s a lot of fun to follow trails to see where they lead, or to set out to find a new way to get somewhere you like to go on bike. Even on workout rides, it’s sometimes fun to take a new route, if only to rob yourself of the ability to look around and immediately know how far you’ve ridding — and how far you have yet to go.

On the way back Audra shot this picture of me practicing no-hands riding. Most people learn to ride this way when they’re kids, but somehow I missed out. It’s never too late to learn, right? 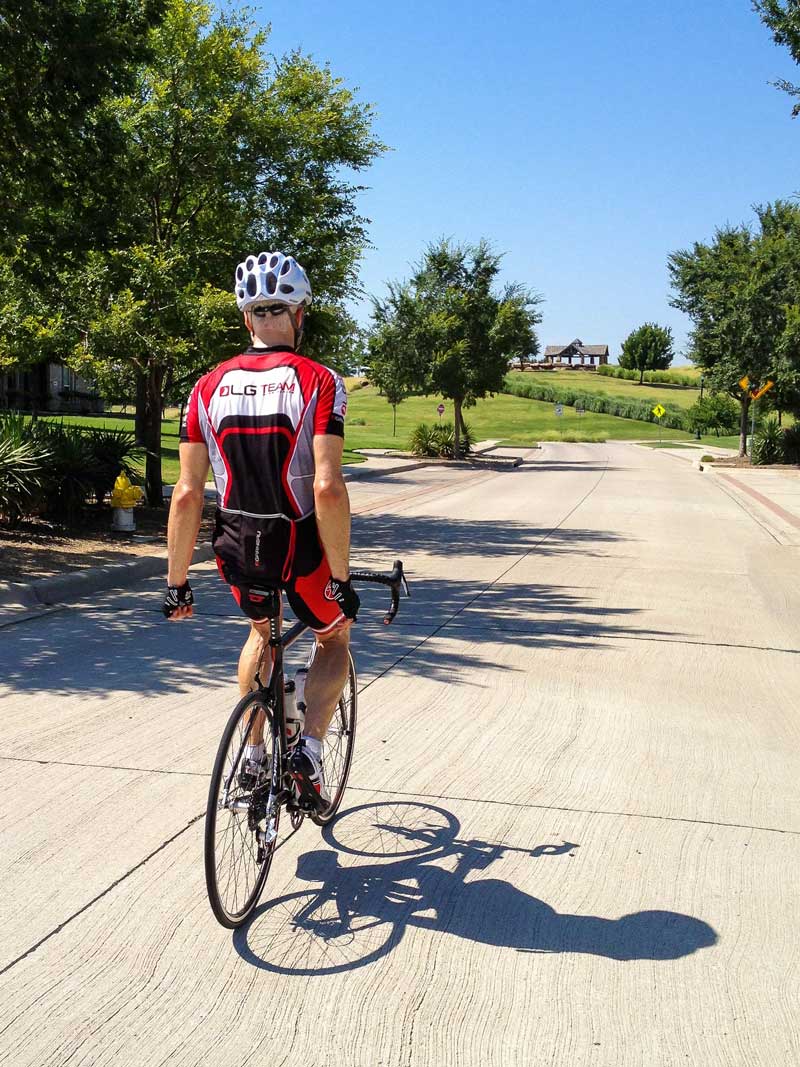 Now I just need to learn to eat while doing this.

The whole trip made for a nice 32 mile ride and a great start to the day. 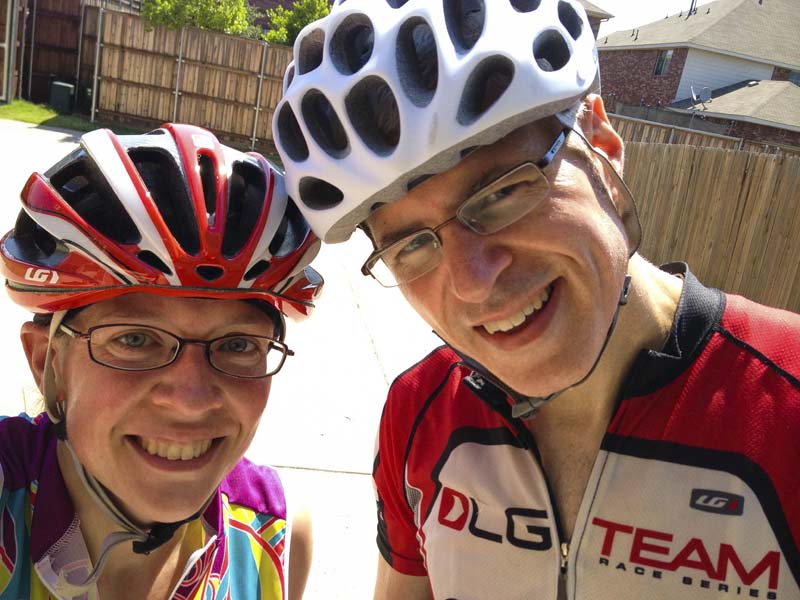